I grew up in the suburbs of Ottawa. I can’t say that I have always been interested in nature growing up, like a lot of my peers. It was not a big part of my parents’ upbringing, and so it wasn’t a big part of mine. However nowadays, an appreciation for science and nature is largely what defines my perspective and lifestyle.

My appreciation for nature came later; it developed during my undergraduate degree at Queen’s University. One class I took began with the professor saying, ‘humans are just fancy fish’. It was this framework of evolution that drew me to biology. The first field course I took was essentially a road trip from London, Ontario to Tucson, Arizona focused on desert ecology. It was the first time I was encouraged to explore, become observant and think about how anything could live in such a harsh environment. Learning about evolution, having a few charismatic professors and taking field courses are what sparked my interest.

Ever since then, I decided I was going to pursue biology and conservation. I went on to do my master’s at the University of Western Ontario studying some of the effects that landscape fragmentation can have on swallowtail butterflies. Now, I am trying to build a career in the conservation field. 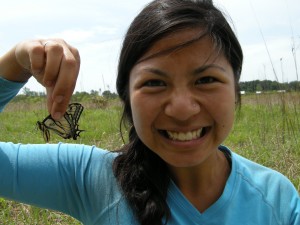